Breastlift, or mastopexy, is a surgical procedure to raise and reshape sagging breasts–at least, for a time. (No surgery can permanently delay the effects of gravity.) Mastopexy can also reduce the size of the areola, the darker skin surrounding the nipple. If your breasts are small or have lost volume–for example, after pregnancy–breast implants inserted in conjunction with mastopexy.

Many women seek mastopexy because pregnancy and nursing have left them with stretched skin and less volume in their breasts. However, if you’re planning to have more children, it may be a good idea to postpone your breast lift. While there are no special risks that affect future pregnancies (for example, mastopexy usually doesn’t interfere with breast-feeding), pregnancy is likely to stretch your breasts again and offset the results of the procedure.

Mastopexy does leave noticeable, permanent scars, although they’ll be covered by your bra or bathing suit. (Poor healing and wider scars are more common in smokers.) The procedure can also leave you with unevenly positioned nipples, or a permanent loss of feeling in your nipples or breasts.

The incision outlines the area from which breast skin will be removed and defines the new location for the nipple. When the excess skin has been removed, the nipple and areola are moved to the higher position. The skin surrounding the areola is then brought down and together to reshape the breast. Stitches are usually located around the areola, in a vertical line extending downwards from the nipple area, and along the lower crease of the breast.

Some patients, especially those with relatively small breasts and minimal sagging, may be candidates for modified procedures requiring less extensive incisions. One such procedure is the “doughnut (or concentric) mastopexy,” in which circular incisions are made around the areola, and a doughnut-shaped area of skin is removed. Another option is a vertical (lollipop) mastopexy, which only the scars around the areola and a vertical scar going down to the breast crease. 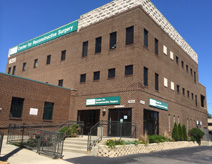